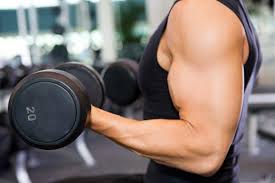 Our joints rarely move in isolation. The larger the movement, the more joints and muscles must be recruited to provide efficient, well-coordinated motion. Simply lifting your arm overhead involves everything from your neck and upper back through to your shoulder and upper arm… AND depending on whether you’re sitting, standing or even running; the rest of your trunk and lower limbs may contribute too!

Movements in compound exercises obviously recruit a number of local and associated musculoskeletal structures either as co-contractors or stabilisers but it’s important to recognise that this happens in ‘isolation’ exercises also…even preacher curls work a lot more than just the biceps! Lesser known arm muscles such as the brachialis and brachioradialis also contribute to elbow flexion, while the rotator cuff of the shoulder stabilises against unwanted rotation, elbows are held down against the bench by triceps and lats, and so on.

It’s tempting to think that when generating maximal power in an exercise, each muscle used simply operates at their maximal output.  However, power output is both generated and limited by the recruitment pattern of muscles rather than said muscles just going all out in contraction. Throughout the movement, each muscle about a joint contracts with varying degrees of speed and  force, with the same occurring at every joint involved in that one motion.

What does this really mean? Put simply…you can only get the most out of your biceps when all the other muscles involved are doing their job optimally and in order to do their job ‘optimally’ we need to be able to get them into their optimal position -their anatomic ‘neutral zone’ where the majority of their fibres are able to be recruited. In real life this means that you can only curl your potential maximum if you have adequate range of motion available at the wrist, elbow, shoulder and thoracic spine.

It also stands to reason that training within a limited range of motion will only yield results in the range trained. The interplay of muscles that occurs with full range of motion is not stressed to the same degree, meaning power improvement will also be limited to that range trained, not to the movement overall and certainly not to your daily functions that utilise that movement pattern.

Training through full range of motion activates and loads all muscles involved in that motion in the necessary combinations and sequences. There are several benefits to this; first and most obvious is that you’ll be able to generate power from any position of the joints for that motion. Simply having trained through the full range means you’re much more likely to recruit the correct combination of muscles at any point of that movement and ultimately this translates to increases in overall power production since the body is working efficiently as a whole….the way it evolved to work!

Like power production, injury prevention also requires strength and mobility further afield. The earlier example of lifting your arm overhead is relevant here; meaning that any other part of the body involved in that movement can be subject to injury if the shoulder doesn’t move well enough. If your shoulder only moves to a certain point, to produce adequate arm elevation means your shoulder blade has to move more, and ultimately your neck is implicated. This means that neck injuries in training are commonly related to shoulder dysfunction. Similarly, having poor ankle motion means your knees and hips have to work harder  in squatting movements and therefore hip injuries frequently relate to ankle dysfunction…even when people don’t know they have ankle problem!

Having correct mechanics and adequate mobility mean other structures are not placed under undue stress, minimising risk of injury and maximising power production. Certainly limited ranges for training are sometimes called for but full range of motion training offers additional benefits that shouldn’t be overlooked.